Epilepsy Is More Than Seizures 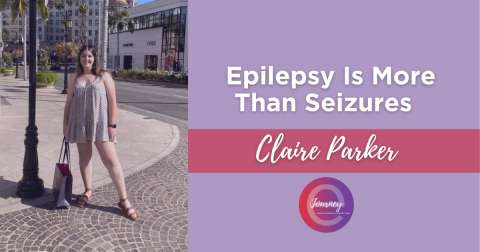 Midway through my freshman year, I remember noticing how my academic processing speed was slower and I kept zoning out of class. This was unusual for me, so I was referred to different medical professionals, but we could not find an answer. I had to work a lot harder in school, which honestly came as a slap in the face, especially since I could do almost everything with ease up until that point.

These zoning out and staring spells worsened and intensified my sophomore year when I faced some serious injuries. I experienced multiple concussions and a broken nose. I continued to visit doctors but still had no definitive answer as to what was causing my neurological issues. My injuries made school even harder for me, but that only made me more academically driven.

As a result of my brain abnormalities, my career interests seemed to be leaning toward neuroscience and pediatric neurology. I even went to a neuroscience camp at the University of Colorado. This career pathway would allow me to research and investigate my own issues. I also wanted to go into neurology to be a “hero” to other families so that they would not have to experience the uncertainty that I went through.

It was not until the week before my senior year of high school began that I finally got a diagnosis for my zoning and staring spells. After having what appeared to be a seizure episode, a pediatric neurologist ran a 24-hour EEG test. Although I felt fine and did not notice myself having any spells during that time frame, I showed seizure activity and brain abnormalities during the test. I was finally diagnosed with epilepsy. After more than two years of frustration and wondering what was wrong, I was so thankful to have an answer.

Five years later, there are still many obstacles to deal with. Doctors' appointments, school accommodations, and driving restrictions have all impacted my teenage years. There is a lot more to epilepsy than just seizures, and many people don't realize this. The recovery, mental health struggles, and effects on family and friends are all aspects of epilepsy that I deal with as well.

I try to keep a positive, lighthearted attitude about my epilepsy journey. I am grateful to my doctors, family, and friends who have supported me and helped me along the way.