The Ketogenic Diet Up North

Report from a Canadian Seminar for Medical Nutrition Therapies

On Sunday March 28th, 2010, I had the pleasure to attend and speak at a conference held at the stunning Palais Royale on the shores of Lake Ontario in Toronto. This meeting was sponsored by the Epilepsy Cure Initiative and Nutricia, Inc. in order to raise awareness of the use of dietary therapies for children and adults in Canada. The meeting coincided with the international “Purple Day” for epilepsy awareness. The founder of Epilepsy Cure Initiative, Margaret Maye, is a famous soprano who has a son with epilepsy (who also attended the meeting). Approximately 90 dietitians, neurologists and parents attended the meeting, which to my knowledge (and those who were there), was the first of its kind in Canada. 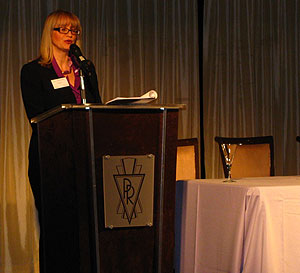 Margaret Maye opened the meeting with a welcome to the audience and highlighted the difficulties she has found in Ontario finding a keto team for her son. The first speaker was Dr. Elizabeth Donner from the Hospital for Sick Children in Toronto. Dr. Donner discussed epilepsy in general, with then further information on the ketogenic diet and for whom it is started. She also presented information about the overall efficacy of the ketogenic diet and its side effects. I lectured after Dr. Donner and presented an update on the use of the modified Atkins diet. Just prior to lunch, the mother of a teenager who was treated successfully years ago in Toronto with the ketogenic diet discussed her and her families’ experiences. 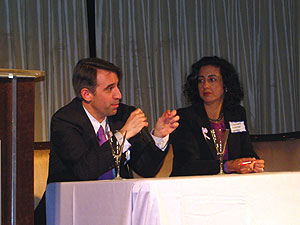 Drs. Eric Kossoff and Elizabeth Donner at a question and answer session

The afternoon lectures were devoted to the more practical aspects of using the ketogenic diet, with three dietitians reporting their experiences. First, Jennifer Fabe MSc, RD from McMaster’s Children’s Hospital in Hamilton, Ontario, discussed using the ketogenic diet as an outpatient (versus starting in the hospital) and how ratios are calculated. Second, Christiana Liu, MSc, RD, CHES from Hospital for Sick Children in Toronto spoke about the advantages of the MCT diet. Finally, Lynn Earle, MPH, RD from St. Mary’s Home for Disabled Children in Norfolk, Virginia presented her early but very interesting experience starting the diet via gastrostomy tube in children with difficult-to-control seizures in a group home setting. 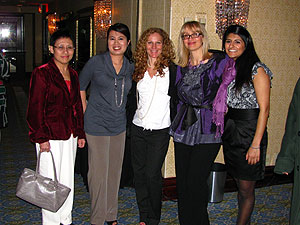 The meeting ended with a 2-hour cooking class held by Nutricia and Chef Neil Pallister-Bosomworth, similar to what has been done at the Scottsdale ketogenic dietitian meeting and other conferences. Many parents came just for this session at 3pm. 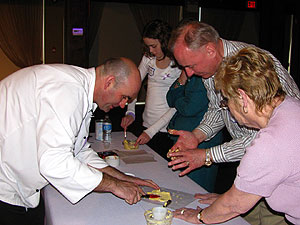 Report from a Canadian Seminar for Medical Nutrition Therapies

I personally was thrilled to be in attendance at this historic meeting, hopefully the first of many in Canada. There are many different centers in Canada and one hopes as a result of this meeting there will be more clinical and research collaboration in the future. I also share Margaret Maye’s wish that more children and adults can find ketogenic diet centers in Canada to help start dietary therapy if it is medically advisable. 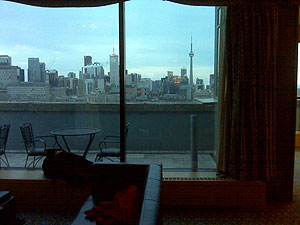