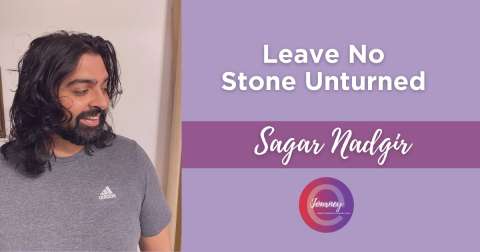 I had trouble maintaining friendships or being “normal” from an early age. My first tonic-clonic seizure happened when I was 9 years old, and it was attributed to photosensitivity and video games with no other causes taken into consideration. Four years after that, the seizures returned and got progressively worse over time.

I had continued tonic-clonic seizures, and convulsions, and would wake up in a lot of pain not knowing who I was. It was pure anxiety to know I would eventually fall, but I did not know when. Expensive MRIs and EEGs every year did not show anything to help. I lost connection to my culture, gave up my dreams early, and made every life choice out of fear and trying to make the best of it. My self-esteem ceased to exist.

Somehow, I still made it to college and my issues became more frequent and unpredictable, but that’s when things changed. I learned as much as I could about GABA as a receptor and neurotransmitter and how it could be modulated. I learned about immunology and inflammation, neurobiology, and pharmaceutical chemistry. One day, an orthodontist recommended medication for surgical reasons, and it undeniably worked, and for once, I knew exactly why.

It has been scary waking up from the most unrelatable nightmare I experienced. I am now 35 years old and have been free of seizures for 11 years. Now with relevant scientific experience, I often wonder what happened and why. Somedays I do not know how I made it through, but I do know that I want to make it better for other people who share my experiences.

I have made it a life goal to do my best no matter what and try to make up for the time I lost. I have a master’s degree in infectious disease sciences, and I am a self-taught multi-instrumentalist. It goes to show one simple thing: there is really no privilege like simply being conscious; in control of your mind, body, and actions. It gives me what I feel is an unmatched thirst for learning. Although my back is still in undeniable pain from my last seizure in 2010, I have hope again. Tomorrow is looking better and better somehow.

I wish the same for anyone on this journey. Do not give up, do not give in, and do not take no for an answer. Read, talk to scientists and doctors, and leave no stone unturned!