Traveling the Globe With Epilepsy 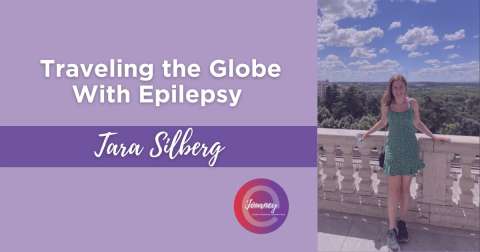 My name is Tara Silberg, and I am currently a master's student living with epilepsy in a country thousands of miles away from home. I was diagnosed with focal onset impaired awareness seizures at 16 years old when I was driving the car to school with my mom in the front seat and lost control of the wheel on the main road.

We were lucky enough to live through those moments of my seizure unscathed and immediately following, visited a neurologist where I was properly diagnosed with epilepsy. My journey to where I am today has been like those moments on the road: bumpy, and oftentimes in the moments of greatest difficulty, I felt unable to see what my life will be like ahead.

In the beginning, my seizures were uncontrolled. On one day each month, I would have up to three seizures in a day. One medication left me unable to lift my head off the table with endless tears and exhaustion, the next gave me great energy but ended with a potentially fatal rash, and the third provided me with stability, but a lack of success in fully eliminating my seizures.

At one point in between my own trials of these drugs, I realized I was tired of playing with my body and went on a trip without any medication. Although I felt like myself for the first time in months, I had multiple seizures and realized it wasn't worth risking my life. I came home to get back on track and began my third medication, which I have been on to this day.

While it was not exactly the way I pictured the end of my high school years, my diagnosis of epilepsy changed my perspective on life. I realized that there were events beyond what was happening in the school cafeteria, and a world out there waiting for me to make a difference.

I became involved in the nonprofit world by advocating for those with epilepsy through volunteering with the FACES (Finding A Cure for Epilepsy and Seizures) organization at NYU Langone and joined a support group at EPIC Long Island. After finding my place in the community, I went on to represent New York state and spoke to members of Congress on behalf of people with epilepsy during my senior year.

Following high school, I became involved in my college’s Students for Epilepsy Awareness club and eventually took over as President in my final years. After graduating with an honors bachelor's degree in human services, I decided to pursue my master's degree in human rights to continue fighting for a world without discrimination. To this day, I am proud to share my journey with all who are willing to listen. I look forward to working with the community and educating the public about my own journey as well as learning about others.

After trying four different anti-seizure drugs over many years, a ketogenic diet in addition to medication, and a multi-day hospital visit over my 21st birthday, I am blessed to have found freedom from seizures. I live on my own in a country outside of the U.S. Medications to control my seizures, a self-made schedule that works with my condition, and the ability to know my own limits when it comes to my body helped make it possible.

I am grateful for the assistance of my neurologist who has guided me through constant changes and for the endless support and love of my family and friends. I would not have made it to where I am today without them. As a constant traveler, I wear a medical bracelet on my left wrist that says “EPILEPTIC." At this point in my journey, I could not be prouder to show the world who I am.