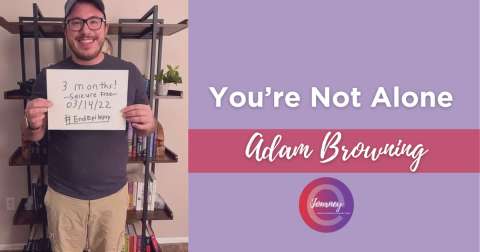 I’ve had seizures since I was 5 years old, but they were not consistent. Some of the first seizures would happen at my friend’s houses. I remember trying to hold on and not pass out. It was only when I entered puberty that I would have tonic-clonic seizures several times a month. I was diagnosed with epilepsy when I was 13 years old, and it took trying several medications before I found one that would control my seizures. I felt confused, scared, and had several other emotions that a 13-year-old should never have to go through.

Over time, most of my seizures began happening at night when I was asleep. I would wake up with a pounding headache, feeling dehydrated, and all my muscles hurt. Sometimes, I would have one episode a night, and other times, I would have several and require a hospital visit.

The worst thing that happened was falling out of my bed and busting my head open. My mother would find me unconscious and bleeding on the floor. I can’t imagine what she was feeling seeing me in this condition. When I became conscious again, she was there by my side, keeping strong, even though I know she was terrified inside.

These experiences led me to realize how important it is to have a support system. My support system has been my constant anchor through my epilepsy journey. It consists of many individuals who have all been affected by my epilepsy in some way. When I would start the recovery process, my support system would be there to pick me up and get me walking again.

A special person in my support system is the person I was able to say, “I do” on my wedding day. As a teenager, I was not sure I would be able to share my life with someone else. My wife has witnessed several of my seizures. She is the calming voice tethering me to reality. When I am not aware of my surroundings and cannot recognize her face, I still know it is her because of her voice.

I have lived with epilepsy for about 20 years, and I have documented my journey by keeping a journal. I talk to people who want to know more and share my story in every way possible. In my position as a special education teacher, I bring awareness to epilepsy.

It is my hope that talking about my journey will help others to not feel so alone. I hope my story helps them keep fighting. I hope it helps them realize the importance of having support on their journey too. My support system keeps the lights on even when my epilepsy tries turning them off.