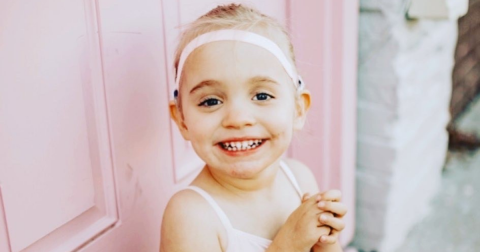 In 2015, I became pregnant with my second child. At our 20-week ultrasound, we were told that our baby's brain was not developing as it should. We were referred to a maternal-fetal medicine clinic where we did an amniocentesis (a prenatal test in which a doctor extracts amniotic fluid for testing). Ten agonizing days later, we were told that our baby was infected with Cytomegalovirus (CMV).

CMV is a common virus and is usually harmless in the general population. However, if a pregnant woman contracts the virus and passes it onto the unborn child (known as congenital CMV) the effects can be severe. We were told our child could be born perfectly healthy or could have a host of complications and permanent disability. None of our friends and family had ever heard of congenital Cytomegalovirus (cCMV). We learned so much about cCMV in those first few days, including that CMV is the most common virus infants are born with. About 1 in 200 infants are born with cCMV, and 1 in 5 of those children will have a permanent disability or health condition. Four hundred infants die each year because of cCMV, and it is likely a significant cause of miscarriage and stillbirth. cCMV is the leading non-genetic cause of childhood hearing loss and one of the most common causes of childhood disability. We learned that CMV is a much greater risk to babies than many things our doctors had told us about. More children are disabled due to CMV than many other well-known disorders, including Down Syndrome, Spina Bifida, Zika, and Toxoplasmosis. Finally, we learned that pregnant women could lessen the risk of passing CMV to their babies by following simple hygienic precautions, something no one ever told us about.

After our baby was diagnosed with cCMV, the doctors told us there was nothing that could be done for her. We pursued a second opinion and began experimental cCMV treatment at the University of Minnesota. We received 4 immunoglobulin infusion treatments during the pregnancy. Although this treatment was deemed “experimental,” it was covered by insurance and provided the assurance that we were doing everything we could to help our baby.

Our daughter, Pippa, was born in October of 2015, delivered early due to a knot in her umbilical cord. She spent 3 weeks in the NICU, learning to eat and breathe on her own. She had been unexpectedly born out of state, so this was a very stressful time for our family. The NICU did not have the ability to let us stay overnight, so we stayed at a nearby Ronald McDonald House. It was very hard to leave our tiny baby each night. We learned how to navigate all her cords and tubes. We learned how to read the monitors she was attached to. We watched her slowly make progress and rejoiced when she met small milestones and was able to come home with us. We are very grateful to the wonderful NICU staff, as well as the Ronald McDonald House, for helping us through a very difficult time.

Pippa received antiviral treatment for 6 months after birth. She received Early Intervention services in our home. She was a very healthy infant and gained weight well. However, at about 6 months of age, we noticed that Pippa was not meeting typical developmental milestones. An MRI of her brain revealed calcifications, white matter changes, and Polymicrogyria. We were told that these findings put her at risk for developmental delay and seizures.

At age 1, Pippa had her first seizure and was hospitalized. She was diagnosed with complex partial seizures and began medication. Over the past 4 years she has had over 12 seizures, although they are relatively well-controlled with medication. Pippa has many other diagnoses related to being infected with CMV before birth. She has an intellectual disability, motor delay, swallowing disorder, and she started to have hearing loss at age 3. She is non-verbal and has started using a communication device. She wears bilateral hearing aids, ankle-foot orthosis (AFO) braces, and has a gastrostomy tube (G-tube). She began walking shortly before her 3rd birthday. Pippa loves Daniel Tiger and going on walks. We are fortunate that she is a healthy and happy child.

I think a lot about what our lives would be like if we had been educated about CMV before or during my pregnancy. Looking back, it seems like many assumptions were made, and opportunities were missed to prevent cCMV from impacting Pippa and our family. I have discovered there is a lack of knowledge about CMV among women, families, and healthcare providers. Congenital CMV is a complex, critical public health issue. There are, however, things that can be done to ensure that the impact of cCMV is reduced. If we can make considerable strides in three main areas, we can eliminate pregnancy loss, childhood death, and disability due to congenital CMV.

Women need and deserve to know about one of the most common risks to their pregnancies. Only 9% of women have even heard of CMV, let alone understand the immense impact it has on infant health in the US. One of the main sources a family turns to for accurate information during pregnancy is their healthcare provider. However, for a various reasons, many providers do not realize how common cCMV is, the number of disabilities it causes, or the fact that it can be prevented. I had preconception counseling for both of my pregnancies and was at an increased risk for CMV during my second because I had a toddler in daycare. But not one healthcare provider discussed CMV with me. Instead my providers educated me about things that are much less common in pregnancy. We need providers to be up to date on the latest information on cCMV, and to discuss this information with their patients.

One of the reasons for the low awareness of cCMV is that the vast majority (90%) of infants born with CMV appear healthy at birth and will never be identified as being born with the virus. However, these infants can develop health problems months or years after birth. By the time these problems are apparent, it can be too late to tie them back to cCMV and too late for early intervention. That is why I think screening every baby for CMV is so essential. Infants born with CMV should have frequent hearing testing, and their development should be monitored. All infants born with CMV should be evaluated by a practitioner familiar with cCMV to determine if treatment with antivirals is appropriate, as well as determine if any other referrals should be made. Families deserve to know if their infant is born with a virus that could impact their future development.

Finally, I want a CMV vaccine. The best way to tackle the devastation cCMV causes is by preventing it from happening in the first place. In the past year, we have seen how crucial vaccine development can be. However, we have also seen that vaccines require funding, demand, and public awareness. All of these things are hard to come by when few people have heard of CMV, and even fewer understand its impact. CMV is a critical problem, and a vaccine is needed now. Every year without a vaccine, an unknown number of stillbirths and miscarriages will be caused by cCMV. In 2000, the Committee to Study Priorities for Vaccine Development estimated "40,000 infants born every year in the United States with CMV infection and assumed 400 deaths annually from the congenitally acquired CMV infection and about 8000 children with permanent disabilities" [1][2]

To me, my sweet Pippa is one in a million. Unfortunately, she is just one of the thousands of babies born with permanent health conditions because of a preventable virus. By sharing her story and advocating for CMV awareness, screening, and prevention, I know we can make sure that this does not keep happening to families. Together we can #stopcmv.