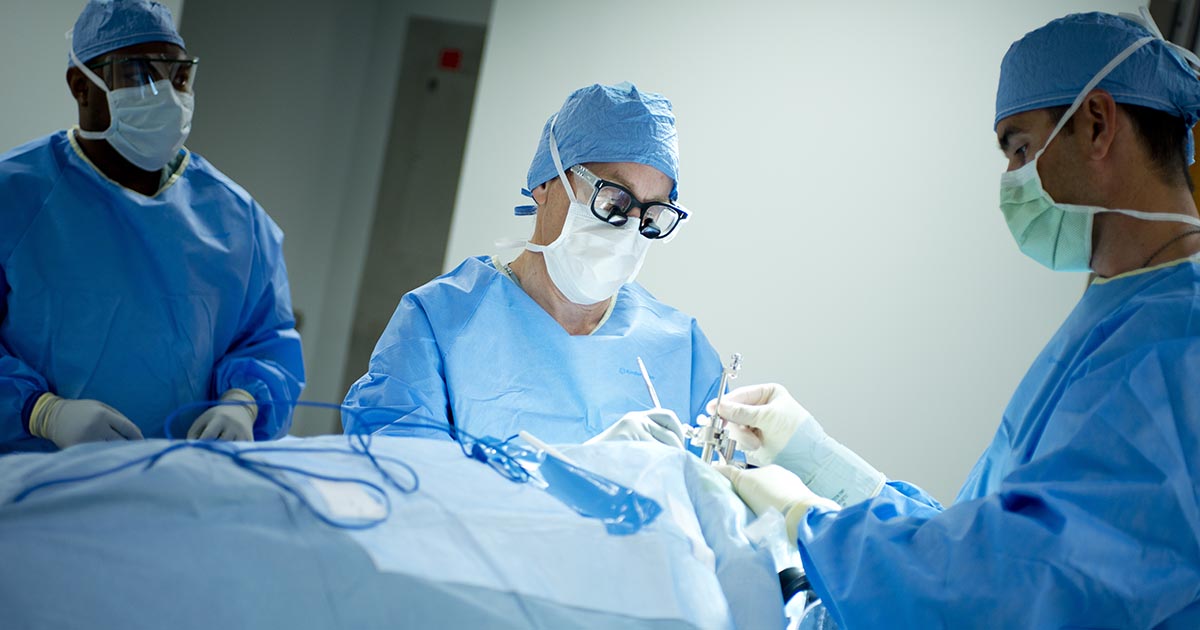 What are the different types of surgery used to treat epilepsy?

Different surgeries are available for different types of epilepsy. These include

Surgery that removes the area of the brain causing seizures is called a focal resection. The area of brain being removed is referred to as the “seizure focus,” meaning the place where seizures begin.

Temporal lobe resection is removing a portion of the temporal lobe of the brain. The most common type of epilepsy surgery is an anterior temporal lobectomy. It has the highest rate of success. After surgery, approximately

Overall, in people who are good candidates for a temporal lobectomy, more than 85% will have a significant improvement in seizure control. Most people will need to continue taking anti-seizure medications. Often, over time with the guidance of their epilepsy team, they are able to lower the dose of the medicine they need to take. About 25% of the people who become seizure free eventually can stop taking all of their seizure medications. Read a study about the long-term outcome after epilepsy surgery.

Frontal lobe resection refers to removing an area in the frontal lobe where seizures begin. It is the second most common location for epilepsy surgery.

The success rates for frontal lobectomy are not as high as those for temporal lobectomy. It is still for many people who have drug resistant epilepsy. After surgery:

Although the success rate for frontal lobe surgery is not as high when compared to people who have temporal lobe surgery, there are still 70% of people who do have a great improvement in seizure control. Most people will need to continue taking anti-seizure medications. Often, over time with the guidance of their epilepsy team, they are able to lower the dose they need to take.

The parietal and occipital lobes are located in the posterior (back) part of the brain. A parietal or occipital lobe resection is surgery to remove a part or one of these lobes.

In most cases, this type of surgery is performed when an area in these lobes is found to contain abnormal structure or a lesion. This type of epilepsy surgery is more likely to be successful when it involves a structural abnormality like a tumor of scar tissue.

Removing a lesion that causes focal seizures is called a lesionectomy. People with a focal (well defined) structural abnormality in the brain causing their seizures, such as a tumor or vascular malformation (abnormal blood vessel group), may be considered for this type of surgery. This operation involves removing the lesion and the area of surrounding brain tissue that is causing seizures.

Multiple subpial resections are an alternate type of surgery that is used if seizures begin in a region of the brain that cannot be removed safely. This would include areas in the brain that control speech or movement.

This surgical procedure involves the neurosurgeon opening the skull and making a series of fine shallow cuts (transections) into the brain’s gray matter just below the pia mater. The pia is a delicate membrane that surrounds the surface of the brain. The cuts (transections) work by interrupting fibers that are thought to be involved in the spread of electrical seizure activity.

Laser interstitial thermal therapy is sometimes called laser ablation surgery. During the surgery, a MRI (magnetic resonance imaging) is used to precisely map out the exact area of the brain to operate on. Laser is then delivered with pinpoint accuracy to this area to eliminate the seizure focus. All of this is done without needing to open the skull, making it a minimally invasive procedure.

This minimally invasive surgery can be effective for drug resistant focal epilepsy due to small lesions. This treatment has been used most commonly in people with temporal lobe epilepsy from mesial temporal sclerosis (scar tissue in the temporal lobe). People most appropriate for this type of surgery include

The advantages of this therapy compared to invasive epilepsy surgery include

Early data on laser ablation surgery shows more than half of people treated with LITT achieve freedom from seizures.This type of surgery continues to be carefully studied. A multicenter clinical trial is ongoing to assess the safety and effectiveness of this procedure in individuals with mesial temporal sclerosis.

Anatomical or Functional Hemispherectomy and Hemispherotomy

The results of these surgical procedures are very good. Generally over 80% of people have markedly improved seizure control and many are able to be free of seizures. The outlook for seizure control may be lower if a person has a progressive disorder, such as Rasmussen’s syndrome.

Corpus callosotomy is usually reserved for people with severe generalized epilepsy (meaning seizures involve both sides of the brain) who are subject to drop attacks (atonic seizures) and falls. The procedure involves splitting the main connection pathway between the two cerebral hemispheres (sides of the brain).

Individuals being considered for this operation usually have

In summary, there are several different types of surgery that are available to treat people with drug resistant seizures. Your epilepsy team will discuss what options are possible for you and will help guide you through the proper evaluation and testing prior to making a decision about surgery.

Risks and Benefits of Epilepsy Surgery