Sudden unexpected death in epilepsy (SUDEP) is said to occur when a person with epilepsy dies unexpectedly and was previously in their usual state of health. The death is not known to be related to an accident or seizure emergency such as status epilepticus. When an autopsy is done, no other of cause of death can be found. Each year, more than 1 out of 1,000 people with epilepsy die from SUDEP. However, it occurs more frequently in people with epilepsy whose seizures are poorly controlled.

The Epilepsy Foundation’s SUDEP program works to prevent SUDEP and support people bereaved by SUDEP and other epilepsy-related deaths.

Donate to the SUDEP program Now

What does the SUDEP program do?

Why did the Epilepsy Foundation create the SUDEP program? 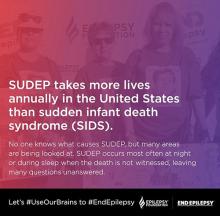 Everyone is aware of the dangers of fire and sudden infant death syndrome (SIDS). Yet each year, SUDEP kills more Americans than either of these. The Epilepsy Foundation understands and places a priority on the importance of educating and supporting everyone affected by epilepsy, including those who have lost.

Who can benefit from the work of the SUDEP program?

How can I learn more?

Who is involved with the SUDEP program?

The Epilepsy Foundation SUDEP program works with leading epilepsy organizations to promote information sharing and facilitate coordination and collaboration. We believe that by working together we can more quickly raise awareness, drive research and promote prevention. The SUDEP program is transparent in its efforts and is eager to share materials and knowledge that advance the field. Our current partners include American Epilepsy Society, CDC, CURE, Danny Did Foundation, NIH/NINDS, North American SUDEP Registry, SUDEP Aware, SUDEP Action, epilepsy experts and many other epilepsy organizations worldwide.

Contact us at sudep@efa.org to learn more about the SUDEP Program and how you and your organization can help us prevent epilepsy mortality.

Donate to Support the SUDEP program