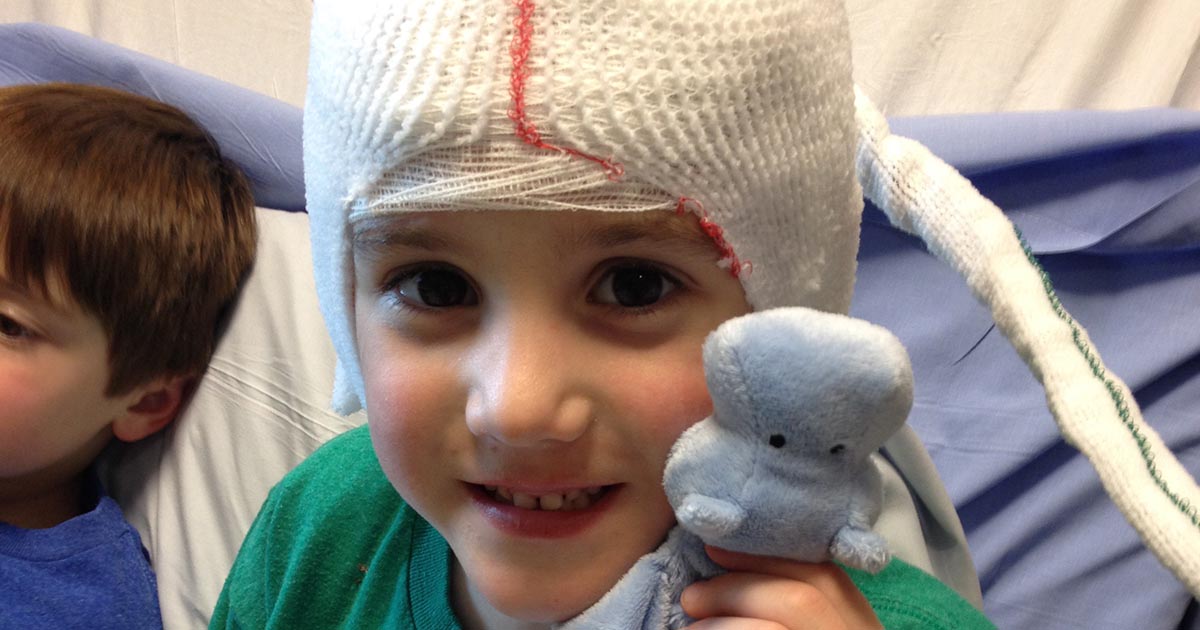 By Stephanie and Reagan Fokas

The Epilepsy Foundation spoke with Chairman of the Board at Epilepsy Foundation Texas – Houston/Dallas-Fort Worth/West Texas (EFTX) Stephanie Fokas and her son, Reagan Fokas. Reagan had brain surgery in July 2012 as a treatment for his seizures, which were resistant to anti-seizure medication. He is currently seizure free after his surgery and with ongoing treatment with cannabidiol. Reagan and Stephanie are both huge advocates for raising awareness about epilepsy and volunteer their time with EFTX and with the national Epilepsy Foundation.

Please share with me a little bit about your family.

Stephanie: We are a family of five and live in Dallas, Texas. My husband and I have fraternal twin boys who are 11 years old, Reagan and Ryan, and a 7-year-old daughter named Kennedy.

How did your family’s epilepsy journey begin?

Stephanie: Reagan had his first seizure when he was 4 years old. It completely rocked our world. I had just had our daughter a week before, and we were on our first family outing together with the baby to watch the twins play soccer.

In the middle of the practice, Reagan fell down in a strange way, but then he got up. We noticed he seemed really uncoordinated afterwards. It happened again a few minutes later. The soccer coach got him up and walked him over to where we were watching and said, “This doesn’t seem right to me.”

We took Reagan to the closest emergency room and they did a CT (computed tomography) scan. They said we should probably follow up with a neurologist but did not give us much more information.

Stephanie: He had two seizures on that first day, five seizures the next day, and seven the day after that. As per the ER’s advice, I did schedule an appointment with a pediatric neurologist, but he couldn’t fit us in for a few days.

When your child has any medical problem, all you want is someone to talk to you about what the diagnosis is, what it might mean, and how is it best treated. We didn’t know anyone with seizures or epilepsy, so we felt lost. We were anxious to just see a doctor and hear them say, “This is why Regan is having seizures and here’s a medicine for him to take that will make the seizures stop.”

We didn’t know anyone with seizures or epilepsy, so we felt lost. - Stephanie

What was Reagan’s experience with anti-seizure medications?

Stephanie: Reagan was put on an initial anti-seizure medication at our first appointment. However, it did not seem to help at all. In fact, we noticed that after starting it, he was having more seizures and that they were lasting for longer periods of time.

The following week, Reagan had more tests done including a short sleep-deprived EEG (electroencephalography), a longer 24-hour EEG, and a MRI (magnetic resonance imaging) scan. We still weren’t getting any answers.

Quickly, his neurologist prescribed him a second drug in addition to the first. We were starting to see terrible side effects with the two medications cocktailed together. But the seizures did not stop. He was put on a third drug, after which we saw a noticeable cognitive decline and balance issues that were making it hard for him to walk and get up and down the stairs.

When did you learn that surgery might be a possible treatment option?

Stephanie: About three weeks after his initial seizure, there was a day that I lost count of how many seizures he had by early afternoon, and I ended up taking him to the ER where he was admitted. During that hospital stay, Reagan went into status epilepticus [when a seizure lasts longer than 5 minutes or when seizures occur close together]. They had to put him into a medically induced coma to help stop the seizure activity in his brain.

The good news was that the doctors felt that Reagan was a very good candidate for surgery. Surgery is often considered early as a treatment option for the type of cortical dysplasia Reagan was diagnosed with.

I am an advocate for continuing therapies so that those living with epilepsy can have improved quality of life. - Stephanie

What process did your family go through to accept brain surgery was the right choice for Reagan?

Stephanie: Reagan went from his first seizure on May 27, 2012, to having brain surgery July 10, 2012 — a mere six weeks. We were watching our son struggle physically and decline cognitively using the anti-seizure medications, and we were thinking, “This is not a long-term option for him.” It was scary to think about brain surgery, but for us, there was no other option.

The medical team shared with us what his surgery would be like and the area of brain tissue they needed to remove. The abnormal tissue causing his seizures was very close to his motor strip, so we knew that he may have some physical deficits as a result of the surgery. We knew there would be risks. My husband and I said to each other in the hallway of the hospital, “Maybe he will have a limp, maybe he will be in a wheelchair, but if he’s not having seizures, it’s worth a shot.”

Reagan went on to have surgery. What was the recovery process like for your family?

Much of his coordination has also come back. He plays basketball, soccer, and participates in kids’ triathlons. He might be the last one to cross the finish line, but the pride he gets from knowing he completed it always makes me smile. Continued therapies have been a huge part of his ability to recover from surgery and live his best life.

Where did your family find support leading up to the surgery?

Stephanie: That was the hardest thing about having to make the decision to get surgery, given that we were barely a month into a diagnosis that we knew nothing about. We were so busy Googling, trying to understand what epilepsy was, and spending so much time in the hospital, that we never thought to look for support. In that place of fear, it doesn’t feel like you can focus on anything else.

I wish I had known more about our local Epilepsy Foundation (EFTX). I would have appreciated knowing that our local Epilepsy Foundation was a place we could find support for our family. Eventually we did find out about the Foundation and all the wonderful programs they offer for families facing the challenges of seizures and epilepsy. We are very involved with their fundraisers, programs, and camps now. Through the Foundation, we have met the most wonderful families who share the same struggles, who have become close friends.

What advice would you give other parents when considering surgery?

Stephanie: If you find that anti-seizure medicines aren’t working for your loved one and have side effects that affect their quality of life, talk to a neurologist or epileptologist (a neurologist who specializes in epilepsy) about all the possible treatments (such as surgery, devices, dietary therapy, and clinical trials). Surgery is not a silver bullet — it doesn’t work for everyone. However, if your child is a surgical candidate, it can be a solution that can have long-term success versus the long-term side effects of anti-seizure medications. All the tools that could be used to provide seizure control and provide seizure freedom should be considered.

Reagan gives so much back to the epilepsy community. Reagan, why do you stay so involved in the community? What have you been up to?

Reagan: I stay involved because I want to raise money for others with epilepsy. I do lemonade stands in my front yard, host other fundraisers, and I recently spoke at the Epilepsy Foundation Texas’ galas where I shared about my experience at the amazing epilepsy camp for kids my age, Camp Spike ‘n’ Wave®.

Stephanie: They brought Reagan on stage at the end of the auction at the galas to talk about the epilepsy camps here in Texas. Reagan shared why the camp is so important and why children with epilepsy should be able to attend a camp to do the type of camp activities that they might not always be allowed to do at home (zip lining, swimming, etc.).

How do you hope to raise more epilepsy awareness in the future?

Reagan: I feel like it’s important to teach kids what epilepsy is, so they know about it and remember it. Last year, I did a presentation to my classmates about epilepsy awareness and first aid. I wanted them to understand that kids like me living with epilepsy need their support, not their bullying.

I think it’s important to teach kids what epilepsy is. - Reagan

Stephanie: If we raise a whole generation of students that better understand seizures and epilepsy, perhaps the issues with stigma of epilepsy would go away. Having more people knowledgeable about seizure first aid would be great, but having the same people be compassionate and kind to those that are different than them would be progress.

In 2 out of 3 children with epilepsy, an anti-seizure medication is able to control their seizures without the need for further intervention. However, in the remaining one-third of children with epilepsy, they develop intractable or pharmacoresistant epilepsy. This means that despite optimizing 2 anti-seizure medications, the child still has seizures. At this point, pediatric neurologists are trained to switch types of treatment. This can include evaluation for epilepsy surgery. Importantly, not all epilepsy centers evaluate children for epilepsy surgery and this must be done at an epilepsy surgery center.

In this thoughtful and heartfelt story, Ms. Fokas discusses the rapid onset of epilepsy in her son and their relatively quick path to epilepsy surgery. Ms. Fokas describes how anti-seizure medications were rapidly started and increased in dose. Unfortunately not only did her son Reagan continue to have seizures on a daily basis, but he developed significant side effects to the medications as well.

Because of his very frequent seizures, including an episode of status epilepticus, his side effects to medication, and the abnormality in his brain, Reagan underwent brain surgery very quickly, in just 6 weeks. Typically, even when children develop intractable epilepsy, they do not have seizures as frequently as Reagan did. Sometimes the epilepsy surgery evaluation is able to be completed in a few weeks. However, more frequently, an epilepsy surgery evaluation takes months or a year to complete, given the complexity of testing needed.

Children are more likely to develop intractable epilepsy if they have seizures from a young age, especially when seizures start in infancy and if they have a structural cause of their seizures. Importantly, when children have frequent seizures, this has a progressive negative impact on their developing brains. Continued seizures may interfere with normal neurodevelopmental processes and can alter neuroprocessing and learning new skills. The goal of epilepsy surgery is to stop the seizures. If not, then surgery can significantly reduce their frequency as well as reduce the negative effects of seizures on the developing brain.

Fortunately, Reagan has done very well after surgery, remaining on minimal medication. His parents can see the change in him and improvement in his cognition and learning following epilepsy surgery. The primary goals were achieved, including making him seizure free and stopping the negative effects of ongoing seizures.