Honoring the Memory of Kate 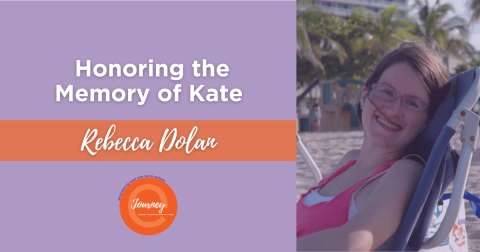 “What is the matter with Kate?” There was never an easy answer to that question.

Our daughter Kate had her first tonic-clonic seizure unexpectedly in 1989, right around her first birthday. A cluster of seizures days after landed her in the hospital. An EEG and an MRI were normal. It was such good news. Kate’s seizures were considered “idiopathic,” meaning the cause was unknown. The doctor commented that seizures around one year of age were not entirely unusual and they might resolve on their own, but they did not.

Kate’s seizures increased in frequency and type. As new technologies became available, doctors explored new possibilities to look for a cause. At one point, her doctors said maybe she just had “Kate Dolan disease,” meaning a condition that was unique to her. It troubled Kate to be impacted by a condition that she could not be diagnosed with and therefore had no prognosis and no course of treatment.

Kate had multiple seizure types but was most impaired by myoclonic seizures that initially caused rhythmic flapping of both arms over her head and which later advanced to involving her legs leading to frequent falls. Her epileptologists said these were a rare seizure type and extremely hard to treat. She took multiple antiseizure medications and had a vagus nerve stimulator implant.

Even though Kate struggled with intractable epilepsy, low muscle tone, and some intellectual disability, she was friendly, positive, and hard-working. Kate beat great odds to become a college graduate. She had a job she loved as an after-school childcare assistant and lived independently.

All this happened before the advent of genetic testing, but in 2014, her doctors ordered genetic screening panels. One for variants known to be associated with epilepsy and one for mitochondrial disorders. These again revealed no cause for Kate’s condition. By 2017, whole exome sequence (WES) analysis targeting the entire genome of DNA expressed in cells was widely available and affordable enough, so Kate supplied her blood for analysis.

This time the result pointed to what was wrong with Kate. She had a variant in a gene called CSNK2b but was categorized as “of unknown significance.” The testing company noted that other patients they had sampled with symptoms like Kate’s had defects in the same gene.

Kate died in 2019 of Sudden Unexpected Death in Epilepsy (SUDEP), so she never learned what was wrong with her. We were contacted by her genetic counselor in 2020 and notified that her CSNK2b variant is now considered pathogenic.

Kate had CSNK2b deficiency. It is also known as Poirier-Bienvenu neurodevelopmental syndrome (POBINDS), named after the researchers who first described the condition in 2017. As far as is known now, the disorder is de novo, meaning an affected person’s parents are not carriers. The gene variant arose spontaneously in Kate. Fewer than 100 cases are known globally but increased genetic testing of younger patients is revealing new cases.

Although Kate will not benefit from this knowledge, I have had the distinct privilege of connecting with an amazing group of parents of children with POBINDS from around the world via a CSNK2b Facebook group. I had a prevailing sad thought in my head after Kate died that no one would ever meet her again.

Now I have found a group eager to learn about Kate and her challenges and how she overcame them. We are collecting information to help develop plans of care to inform health care providers and families about this ultra-rare condition. Although a diagnosis does not yet bring definitive treatment options, data about this condition are building. Hopefully having a diagnosis will make it easier for those affected to receive educational support and to qualify for and keep government services and benefits.