As more and more children on ketogenic diets for epilepsy turn 18, they need a way to safely transition to an adult neurology clinic with diet supervision. Recognizing this need, registered dietitian Bobbie Henry and I collaborated with Dr. Eric Kossoff at the Johns Hopkins Pediatric Ketogenic Diet Center to create the first Adult Epilepsy Diet Center (AEDC) in August of 2010 in order to take care of these young adults. Over 250 patients have come to the AEDC over the past 5 years, and we have learned a great deal from our patients! What we found most surprising was that the majority of new patients that came to see us had NEVER tried diet therapies before and wanted to try them for the first time as adults.

In a paper published in Epilepsy & Behavior we reported the experience of 168 adults seen at the AEDC over 5 years. In the study, 35 (21%) were on a ketogenic diet when they came to clinic for the first time, and 133 (79%) had never tried a diet before. In the group who have never tried a diet, 106 patients were diagnosed with intractable epilepsy (ongoing seizures despite trying 2 or more anti-seizure medications). They were all prescribed a 20 gram per day carbohydrate limit modified Atkins diet (MAD) and followed for up to five years. In the study, 84 patients started MAD and 22 decided not to start.

What did we find? 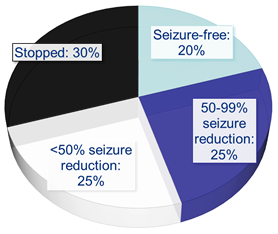 Since opening the Adult Epilepsy Diet Center, we have been challenged with unique issues for adults on ketogenic diets such as driving, moving to college or a group home, planning keto meals for yourself and "regular" meals for your family, alcohol use, and even pregnancy planning. These scenarios bring up some very interesting questions:

Further studies are needed to answer these important questions.

This 2-day professional’s meeting was sponsored by The Charlie Foundation for Ketogenic Therapies, The Epilepsy Foundation of Greater Los Angeles and the national Epilepsy Foundation. Nutritionists, nurses, and physicians from seven southern California medical centers, plus guest speakers, assembled to share clinical pearls on applications of ketogenic therapies. Access the white paper here.