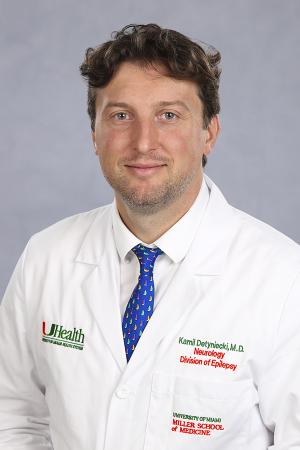 Dr. Kamil Detyniecki is an assistant professor of clinical neurology at the University of Miami (UM), Miller School of Medicine, and attending epileptologist at the University of Miami Hospital and Clinics and Jackson Memorial Hospital. He is director of the clinical trials research program in epilepsy at UM and is the principal investigator of several clinical research studies.

Dr. Detyniecki was born in Venezuela. He earned his medical degree from the Medical University of Warsaw in Poland. He trained in neurology at Drexel University in Philadelphia. Subsequently, he completed a two-year epilepsy fellowship program at Yale University in New Haven, Connecticut.

He was part of the Yale faculty from 2010-2018, where he directed the Epilepsy Clinical Trials Program for 7 years and led over 10 studies as a principal investigator. In 2018, he moved to the University of Miami Comprehensive Epilepsy Center.

Dr. Detyniecki’s research interests and publications include collaborations with major academic institutions, such as Columbia, Harvard and Yale Universities, on topics like effectiveness and tolerability of antiepileptic drugs, seizure clusters, and epilepsy surgery. He has directed symposia and lectured at many national and international epilepsy and neurology meetings. He is a fellow of the American Epilepsy Society where he is part of the Spanish symposium and continuing medical education (CME) review committees.